Fundamental Studies of the CISS Effect

Collaborators: Ron Naaman (Weizmann Institute, Israel), Yosi Paltiel (Hebrew University, Israel)
​
A thorough understanding of the properties that affect the chiral induced spin selectivity effect is important for realizing its true potential. We are studying spin-mediated processes of chiral materials and the tantalizing phenomena that manifest. Our work is leading to technological breakthroughs in the separation of enantiomers and the miniaturization of ferromagnets.
Adsorption / Desorption properties of Chiral Molecules on Ferromagnetic Substrates
We are using electrochemical quartz crystal microbalance (EQCM) techniques to study the interaction energies of chiral molecules with mangetized ferromagnetic substrates. Figure 1A shows a diagram illustrating the experimental setup. Figure 1B shows representative EQCM measurements in which an applied potential controls the adsorption and desorption of a molecule in solution (top, shown as a change in current) and simultaneously measures the change in resonant frequency of the quartz crystal (bottom) indicating a change in mass.
Spin Hall Response of Self Assembled Chiral Monolayers
We are fabricating Hall devices to study the spin polarization of peptide and amino acid self-assembled monolayers upon charge polarization.  The magnetization that accompanies the spin polarization is measured via the Hall effect. Figure 2A shows a microscopic image of a Hall device with a top down view and Figure 2B shows a cross-section schematic.  A constant current flows between a source “S” and drain “D” and upon application of a gate voltage “VG”, the spin polarization induced magnetic field is measured by measuring the Hall voltage as the difference between Hall probes “H1” and “H2”.  Figure2C shows representative measurements on a Hall device in which the Hall voltages (blue) change in response to the applied gate voltage (red). 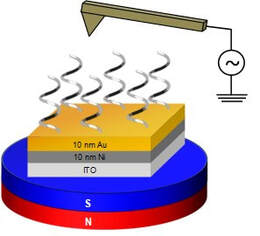 Spin Exchange Interactions at the Interface of Chiral Molecules and Ferromagnets
The control and detection of electron spin dynamics is essential for the realization of spintronic and quantum information technologies. Currently, we are studying the nature of electron spin density at the interface of chiral molecules and ferromagnets using kelvin probe microscopy. Figure 3 illustrates the experimental set up. Measurement show a change in work function that depends on the handedness of the chiral film and the applied magnetization (see Figure 4); For a D-SAM under North magnetization (red) a more negative surface potential is observed than under South magnetization (blue). Conversely, for an L-SAM the opposite dependence is measured. For an achiral SAM the surface potential was found to be independent of the applied magnetic field.
​
​Figure 3. Kelvin probe microscopy setup
used for measuring the surface potentials
​of chiral self assembled monolayers.

Magnetization Induced by Chiral Molecules
We are also studying how chiral molecules can be used to imprint ferromagnetic behavior onto different materials. For instance, we have shown that when 10-12 nm iron oxide nanoparticles (NPs) are adsorbed onto a chiral self assembled monolayer (L-AHPA) the NPs become ferromagnetic. Figure 5A shows the assembly process. The magnetic moment of the NP layer was measured using a superconducting quantum interface device (Figure 5B) in which a ferromagnetic behavior is observed for the composite assembly (blue), but not for the individual components; nanoparticles (black) or self assembled monolayer (red). Magnetic atomic force microscopy measurements (Figure 5C) further corroborate these studies. When the tip is magnetized in the down orientation (bottom, red arrow) a repulsive magnetic interaction is observed (bright spots) and when the tip is magnetized with its field oriented up (top, blue arrow) an attractive magnetic interaction is observed (dark spots). This behavior is reversed when iron oxide NPs are deposited on a self-assembled monolayer with the opposite handedness.
Figure 5. Panel A) shows a representative assembly scheme for imprinting magnetism on nanoparticles. Panel B) shows superconducting quantum interface device measurements on iron oxide nanoparticles (black), L-AHPA self assembled monolayer (red), and iron oxide nanoparticles assembled on top of the L-AHPA monolayer. Panel C) shows magnetic atomic force microscopy measurements with the tip magnetized with its field oriented up (bottom) and down (top). The image contrast illustrates a change in the attractive and repulsive behavior of the substrate to the tip.